Within the next decade, it is expected that augmented reality glasses will equal smartphones in terms of popularity and utility. These AR glasses/headsets, which allow users to view and interact with virtual content in the physical world, have the potential to revolutionize the way we communicate and access information.

In this article, we will explore the potential impact of AR glasses and headsets on various industries and applications, and consider how they may eventually become the dominant form of personal computing. 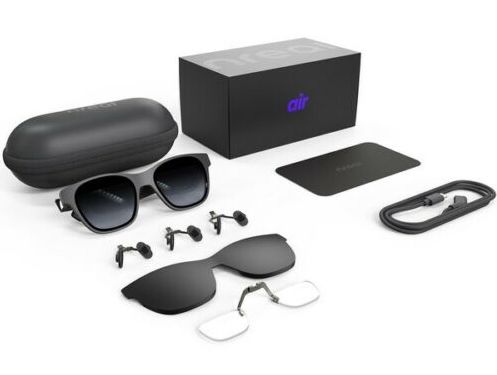 AR headsets are the initial stage in the development of lightweight and sleek AR glasses. However, some companies such as Nreal have bypassed this stage and have begun producing AR glasses. Unfortunately, we still feel the lack of rendering technology to provide high-quality AR experiences without the need for a screen interface between the user's eyes and the real environment.

With the release of the highly anticipated Apple Reality AR/VR headset in 2023, and the increasing availability of other AR glasses on the market, it is expected that the use of these devices will become increasingly widespread. As AR technology continues to advance, it is likely that we will see more and more applications for these innovative devices in a variety of industries. Apple Reality One and Pro: A New Technological Revolution in AR

The arrival of the Apple Reality One and Pro augmented reality headset in 2023 is expected to have a significant impact on the IT industry. As one of the most highly anticipated AR devices on the market, the Apple Reality headset is expected to set a new standard for AR technology and bring it to the forefront of the consumer market. As a result, it is likely that the entire IT industry will have to adapt to these new technological revolutions in order to stay competitive.

Based on patents and reports, some speculated features for an Apple reality headset could include:

Companies that are able to effectively incorporate AR technology into their products and services will have a significant advantage, while those that are slow to adapt may struggle to keep up. The arrival of the Apple Reality headset is therefore likely to mark a turning point for the IT industry, as it shifts its focus towards the development of AR technology and applications.

As augmented reality technology continues to advance, it is expected that AR will become increasingly widespread and accessible. One way that this will be made possible is through the use of AR QR codes, which are specialized QR codes that can be scanned with an AR device to access virtual content.

These codes can be placed on a variety of physical objects and surfaces, allowing users to access AR experiences simply by scanning them with their smartphone or AR headset. With the increasing availability of AR devices, it is expected that AR QR codes will become a common sight in public spaces, providing easy access to a wide range of AR content and experiences. As a result, it is likely that AR will become an increasingly integral part of our daily lives, with access to AR experiences just a scan away.

All Companies Must Adapt to AR Technology

Augmeneted Reality technology has the potential to revolutionize the way we interact with products and services, and companies that are able to effectively incorporate AR into their offerings will be well positioned to succeed in the marketplace. In order to do so, companies will need to invest in the development of AR technology and applications, and consider how they can use AR to enhance the customer experience and improve their operations.

It is likely that the marketing and product development departments will play a particularly important role in this process, as they will be responsible for implementing AR into the company's products and services. The widespread adoption of AR is expected to have a significant impact on the business world, and companies that are able to adapt to this new technology will be well positioned to thrive in the coming years.

Marketing and product development departments will need to invest in the implementation of Augmented Reality, ideally with the use of AR QR codes. These codes are specialized QR codes that can be scanned with an AR device to access virtual content, and they provide an easy and convenient way for companies to incorporate AR into their products and services. By using AR QR codes, companies can enhance the customer experience and differentiate their products and services from those of their competitors.

For example, a company could use AR QR codes to provide customers with a virtual tour of a product, or to offer them additional information and features that are not possible with traditional marketing materials. As a result, it is likely that the use of AR QR codes will become increasingly common in the marketing and product development process as companies look to take advantage of the opportunities offered by AR technology.

Within the next decade, the use of augmented reality glasses could start to overtake smartphone use as the dominant form of personal computing. This shift is expected to be driven by the increasing availability and affordability of AR glasses, as well as the growing number of applications and use cases for these devices: communication, education, marketing, productivity, gaming...

The use of AR glasses has the potential to enhance the way we interact with the world around us, providing a more immersive and interactive experience than is possible with smartphones. As a result, it is expected that the use of AR glasses will become increasingly common over the next 10 years, eventually overtaking smartphone use as the primary way that we access information and communicate with others.